We would also like to share a poem that we put on Vincent's memorial programs. We found it online and knew it was the perfect poem to honor Vincent.

God's Garden
God looked around his garden and found an empty place.
He then looked down upon the earth, And saw your tired face.
He put His arms around you, And lifted you to rest.
God's garden must be beautiful, He always takes the best.
He saw the road was getting rough, And the hills were hard to climb,
So He closed your weary eyelids, And whispered, "Peace be thine."
It broke our hearts to lose you, But you didn't go alone,
For part of us went with you, The day God called you home. 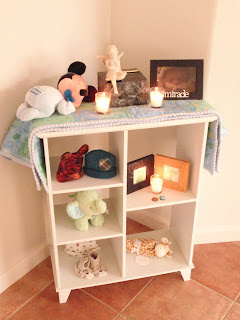 I feel like I should detail the events that led to Vincent's passing. If not for the followers of this blog then for myself. The previous post seemed so hopeful...I'm just still trying to make sense of everything that happened.

The day before he passed we checked in on him in the morning and his ventilator settings were back up. Evidently, he had some trouble that night and they had to up his settings because he kept de-satting. His ventilator settings were back to the maximum and his O2 was back to 96. His sats were in the 80s but his blood pressure was still very low. They did start weaning him off the Pavulon and we were able to see him open his eyes for the first time and what beautiful eyes they were. Looking back now, I wonder if when he was looking at us if he was trying to tell us something. Maybe he was trying to say hello or perhaps goodbye. I don't know but I remember feeling so sorry for him....for everything he was going through.

We decided to take a break and take a walk through Golden Gate Park. It was a beautiful day and it was nice to spend some time together and just take a break from everything. When we got back that evening, his sats had dropped into the 70s. The doctor on that evening came up to us and basically told us that he didn't think Vincent was going to make it through the night. He said that every time they tried to wean him off of anything his sats would drop. They started giving him the Pavulon again which seemed to help his sats but the doctor said that wasn't a long term solution.

We pretty much lost it...all the hope we had was gone. We felt powerless. We stayed with him the whole night just staring as his sats...watching them go up and down...it was terrifying. We asked if they had a room at the hospital we could use to rest for a little bit and they were able to accommodate us with one. We layed down for a few hours and I remember dreaming that we were preparing to take him home. We were getting the car seat ready and driving to the hospital. I remember feeling excited and relieved that he was finally coming home with us.

It was at about 6:00 a.m. when we heard a knock on the door. I'll never forget that moment...we woke up and we just knew. We went to see Vincent and they had him on the hand ventilator and his sats were dropping into the 60s. As much as we didn't want him to...he was letting go. They put us in a room and brought Vincent in and we were able to hold him for the first and last time.

It's been over a week now and we're still trying to make sense of everything. Everyone has been very supportive and we thank you all for that. We have a great support group of friends, family and co-workers as well as our online followers. The doctors and nurses at UCSF were phenomenal, especially nurses Sue, Jeanine, Robin and Crista. I don't know how they do what they do but they are extraordinary people. Our genetic counselor, Katherine Button and Dr. Kobori at Kaiser have also been a great support through this whole thing.

We are planning a memorial service for Vincent next Saturday. Anyone is welcome to attend...the details are as follows:

We Love You Vincent

This is one post I hoped I'd never have to write. Vincent lost his battle with CDH this morning. The doctors did all they could but, unfortunately, his heart and lungs couldn't support his will to live.

He passed away peacefully in our arms. We know he's with God now and he is at peace. We said goodbye to him but he will forever be in our thoughts and in our hearts.

We love you Vincent.
Posted by Reminiscing at 2:35 PM 31 comments:

"He Keeps on Surprising Me"

We checked on Vincent last night after the surgery and the first thing the nurse said to us was "He keeps on surprising me". His stats seemed to look ok. His Sats were high, his CO2 was close to where it should be and his heart rate was down a little. His blood pressure was still fairly low and he has a lot of fluid in his body (which makes him look really puffy).

The nurse said this morning that they are going to start to wean him off of everything. First, the Flowlan because that's what's making his blood pressure so low. Then they're going to try and wean him off the ventilator (they had it on max settings for the surgery). They're also going to wean him off of some of the pain medications he is on. She said that will take some time because they can get withdrawals...just as an adult would if they were dependent on pain meds. She also said they are going to wean him off the Pavulon (paralytic). She said it will be a slow process. He will begin to move fingers and toes, then hands and feet and eventually he'll wake up and start to move his head. She's also hoping that when he starts moving his muscles, he'll start to get rid of some of the fluids in his body.

Robert and I want to thank you for all of your comments and support. I would love to respond to everyone individually but it's just been so crazy with everything going on. But we do read them everyday and they really do mean a lot to us...so, thank you!! :)

We were with Vincent most of the night and his stats weren't looking very good. As tough as it was to leave him, we thought we should try and get some rest. We came by first thing this morning and were surprised to find that his stats were looking much better. His blood pressure was a little low but they felt that this was their best opportunity to do the repair surgery.

They started at about 10:30 a.m. and were done by Noon. Dr. Lee came in after the surgery to let us know that everything went well. He said, as he suspected, the hole was fairly large...there was only a sliver of a diaphragm there. He also said he could see that the balloon did have some effect on the lungs...they seemed to have grown a bit as a result. To repair the diaphragm they stitched a gortex patch over the hole. Their hope is that the muscle will grow over the patch and reinforce the barrier between the abdomen and the chest cavity.

The next 48 hours are crucial. The doctor said there will be lots of ups and downs...that he will get worse before he gets better. They had to up his ventilator to the maximum settings and his blood pressure is still very low. They don't want us to touch him right now but we've been talking to him a lot. He's our little fighter...we keep telling him to stay strong and to fight his way out of this.
Posted by Reminiscing at 4:06 PM 13 comments:

Posted by Reminiscing at 9:18 PM 7 comments:

They had another rough night trying to keep him stable. They want to try one more drug to stablize him called Flowlan. There are some risks involved with the drug but they feel it's worth trying because they're running out of options.

Sorry this is so short...i really don't have the energy to write more. Please, PLEASE continue to pray for him.. 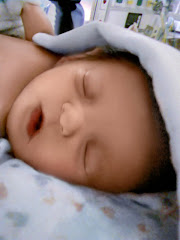 This photo was created by a friend of ours. He took Vincent's photograph and used Photoshop to remove the breathing tube